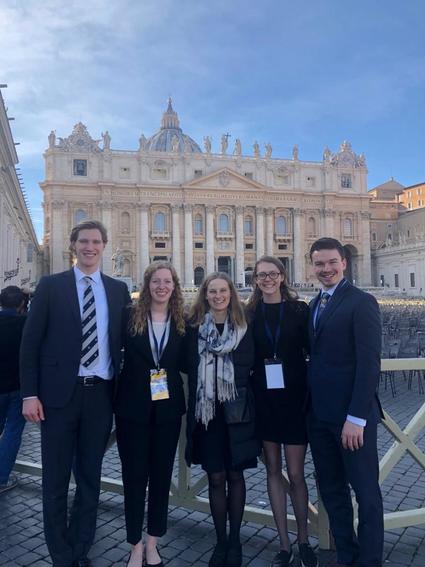 Chris Kreienkamp, Grace Schippers, Hannah Gillespie, Megan Welborn, and Conor Fitzpatrick in front of the Vatican after the conference

Seven students, studying abroad for the semester at the Rome Global Gateway, volunteered in February with the press office for the Pontifical Academy for Life (PAV) conference during the 25th General Assembly. The topic of the event was “Roboethics: Humans, Machines, and Health,” and volunteers shared duties with students from LUMSA University in Rome and Pontificia Università Salesiana.

The PAV kicked off the assembly with a series of opening remarks from President Msgr. Vincenzo Paglia, who introduced the need to discuss new questions posed by modern technology and science. His speech opened the February 25-26 workshop and attracted some of the most pioneering engineers, developers, scientists, and both Catholics and non-Catholics to discuss the ever-growing field of artificial intelligence.

The assembly was attended by more than 140 academics. The public working session took place on Monday afternoon and all day Tuesday, with 250 members and 14 speakers from Africa, Asia, Europe, South America and the United States. As a group, they discussed and examined trends and problems presented by robots.

Hannah Gillespie, a mechanical engineering major, interned at the Pontifical Academy for Life and had the opportunity to work with the communications director, Fabrizio Mastrofini. As an intern, she was responsible for producing reports, summaries, and tweets in English.

“I listened as speakers around the world explained the current state of robotic technology and debated their role in society,” reflects Gillespie. “Even as a mechanical engineering student with lab experience in robotics, I could not believe some of the technology advances that were present in this world and not just in sci-fi. The ethical drama proved extremely complex – how do we integrate robots to work alongside humans? How do we continue to differentiate humanoids/androids from human persons?”

By working side-by-side with Italian students and meeting PAV members from South America, Europe, Asia, and Africa, she saw how these questions impacted the world beyond engineering and the United States.

Pope Francis addressed the assembly in a private audience, urging members to have a greater awareness of the impact of technology on ecology, society, and human relationships. While applauding scientific innovations as products of the human genius that can aid and improve human life, he warned “the technocratic system that is based on the criterion of efficiency says nothing to answer the deepest questions that man asks himself.”

“As a student of both biology and theology, I was encouraged by the Holy Father’s words on the new questions posed by technology and science,” says Talia Caridi, a Rome undergraduate student interning at PAV. “He shares that faith doesn’t need to fear these challenging questions, since every question provides an invitation for deeper intellectual inquiry and spiritual reflection.”

Among the other leading engineering experts, students had the chance to hear the Geminoid creator Professor Hiroshi Ishiguro from the University of Osaka (Japan). He presented and updated the assembly on current robotic technologies. Students spoke with Ishiguro on the state-of-the-art robotic research and the relationship between man and machine. The expert describes his twin Geminoid robot as "a new species, of which we must not be afraid.” Ishiguro says that man is in fact both animal and technology and this can be one of the engines of human evolution.

“It was an awesome opportunity for us to participate to the PAV conference, to have the chance to better understand how the work as an engineer affects actual people as well as how innovations and devices affect the wider society,” says Grace Schippers, a mechanical engineering major. “It also was a fantastic opportunity to meet incredible people with unique perspectives and really expand my view of what the culture of life means in a technological age.”

“I was impressed by the amount of talent in such a condensed space,” adds Christopher Kreienkamp, AME student studying in Rome. “I am grateful for the opportunity to listen to them give their interpretation of the current state of robotics and speak to them individually.” 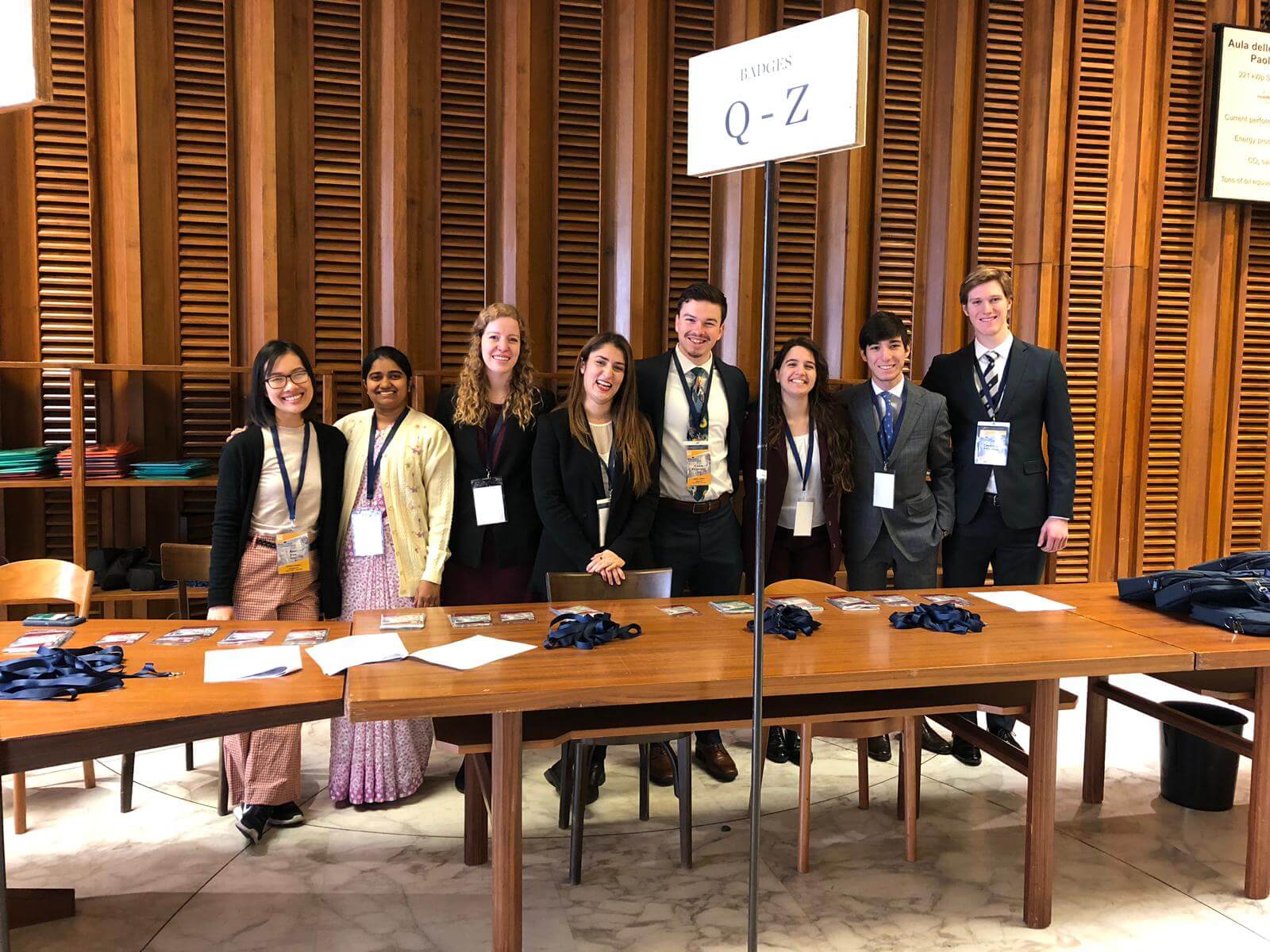 American, Italian, and other students from around the world volunteering to greet guests to the conference.

Originally published by Costanza Montanari at rome.nd.edu on March 13, 2019.